The no contact rule after you’ve been dumped is effective in getting an ex to come back to you and also as a way for you to emotionally recover after a breakup.

But I’m often asked why it’s more effective than staying in contact with an ex.

So I’m going to explain why the no contact rule is more effective than talking, pleading, begging, calling, texting and other reactions to being dumped.

I’m going to compare “no contact” to football and because there are more male fans of football, this particular explanation will likely make more sense to men, but women can certainly learn from this as well.

When you get that phone call or, if your ex did you the honor of breaking up with you face to face, I often tell men that it’s comparable to a fourth down in football.

It’s like a fourth and ten on your own 20 yard line after the quarterback has just been sacked.

If you’ve ever watched football with children, many of them are upset when they see their favorite team punt in this situation because they see it as giving up or as giving the advantage to the other team.

But if you have played football or watched it for a decent amount of time, you know that nothing could be further from the truth.

In fact, a team punts on fourth and ten in order to stay in the game and to give themselves a chance to win rather than giving the other team an easy scoring opportunity.

It’s the exact opposite of giving up or giving away the advantage.

Well for starters, your field position, in my example of fourth and ten on your own twenty, means that a single mistake could be very costly since failure to make a first down on this single remaining down gives the other team the ball very close to the end zone.

You risk losing too much and taking a massive hit against your chances to win the game.

Next, your offense must not be in sync if you’ve failed to move the ball on the previous three downs, so the evidence isn’t there to suggest that they could pull it all together on this single down/play. It’s unlikely.

So punting gives your offense a break, an opportunity to reevaluate, and time to mentally reset - AND it minimizes damage.

Better to punt the ball forty yards away from the end zone than give the other team the ball so close.

Further, it allows your defense to be offensive.

Rather than get too deep on coaching and theories of football strategy, I’ll keep this simple.

In football, if your defense makes plays against the opposing offense, it can result in yardage going the other direction just as your offense could with a completed pass for a positive gain or by running the ball.

Here’s the deal if you are asking if the no contact rule will work if you were dumped:

When you don’t contact your ex after a breakup, you put the ball in her hands.

Your defense is her contemplation of the relationship and her doubt.

If you don’t contact her, she’s not having to constantly defend her decision of breaking up with you against your begging and pleading. So she’s not reinforcing her reasons for dumping you.

Instead, her own mind is acting on your behalf by responding to your absence with memories of you and the relationship you had.

Those positive memories, which naturally rise to the top since you have disappeared rather than being a negative, nagging source in her life, act as your defense.

And as time adds up, her doubts make your defense a strong wall.

This means that, at the very least, your ex doesn’t move the ball forward. Which means, as far as the game is concerned, you haven’t been defeated. 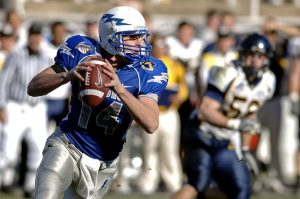 At this point, the game is now being played in her head.

Her offense, which as I said, are her reasons for breaking up with you, is now up against her own defense.

That’s right, because of your radio silence, she is defending you against her own self.

That’s just how the mind works.

For every reason her mind suggests as justification for leaving you, your ex’s mind comes back with an answer or good memory of you or the two of you.

And she starts losing yardage as the doubt blitzes her quarterback again and again.

Sounds like a lot is happening when all you did was leave her alone.

That’s how the human mind works when it comes to relationships. (Also see What Is My Ex Thinking During No Contact)

Your ex learns the most about how she really feels about you when she misses you and when she is given space to do so.

Give her that opportunity by going no contact on her if she has broken up with you. Trust it.

The old adage is true that sometimes you have to lose the battle to win the war.